It’s the vibe, man. Bonnaroo a hit with this generationally challenged guy 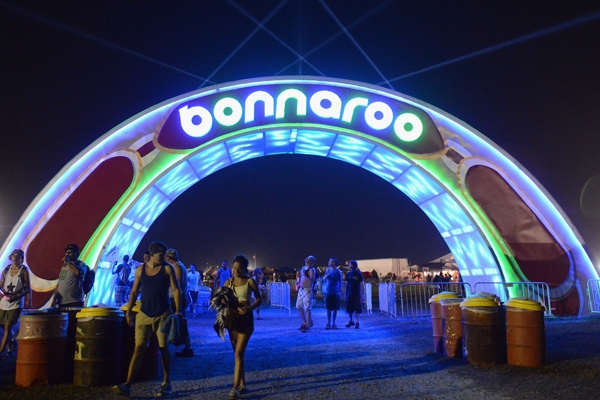 The vibe. The people. Oh, and some music, too. Those three sentences summarize my visit as a novice to Bonnaroo on Friday the 13th.

It seemed to be my lucky day, even though I might have been one of the very few attendees who had already been drawing Social Security for a while.

Taking advantage of the one-day, round-trip offer on a spiffy bus, I was joined by a couple of slightly younger buddies: native Nashvillians Herb Maxwell, a local businessman, and Mike Patrick, an attorney now living in St. Simons Island, GA. They had jumped at the invitation to join me in “experiencing” Bonnaroo, and, after a late breakfast of mostly Bloody Mary’s, we departed LP Field at 11 a.m., along with 50-plus quite lively 20-somethings. Ninety minutes later, we disembarked at the Bonnaroo gate and began walking (you do a lot of this, by the way) to see how this temporary “city” of 85,000 functioned. I was particularly interested in knowing why folks wanted to camp out for four or five days, walk a lot, stand a lot, and, depending upon the weather, traipse around in either dust, mud, extreme heat or high humidity, while regularly visiting the long lines to the portable toilets.

Arriving at sort of the center of the 700-acre farm site, we decided that refreshments were in order and chose the Broo-ers Festival, a tent filled with regional craft beer offerings. After receiving my over-21 arm band (the trusting attendant was kind enough not to ask for my driver’s license), we went outside to picnic tables conveniently located under shady trees and determined that this would be our oasis for meeting and resting. We felt that this was a wise veteran’s move for such first-timers, as we quickly discovered as we passed several music venues that there were two distinct viewing options: standing or sitting on the ground.

As we began walking around to some of the music venues, the event’s “vibe” quickly emerged. No one was in a hurry. Everyone was courteous. The overall attitude was “welcome to our show, come groove with us if you like.” Eventually we separated, and after a while I picked up a chicken shish kabob, and headed back toward our oasis. Armed with additional refreshments, I sat down to begin experiencing “the people.”

Sitting across from three guys, (late 20’s), who were laughing about movies I had never heard of, I noticed right away that their accents “weren’t from around here.” Soon they turned to me and said, “Welcome Dude. Happy Bonnaroo.” The two who were from Boston had picked up their friend in New York and driven down to Manchester for their sixth Bonnaroo. When I told them of the vibe I’d picked up in my brief time on-site, they said that was precisely why they kept coming. “Man,” said the New Yorker, “in six years I’ve run into only one jerk. In New York, I look out for them at every turn.” We parted as buddies, vowing to “see you later,” which we knew probably wouldn’t happen……not that it actually mattered.

Among my encounters: A 50-ish guy from Louisville at his ninth Bonnaroo, still turning in a bit earlier than his DJ-jiving wife, whom he said might make it back to their tent before daylight; a gaggle of barely post-teen girls from Chicago who’d already been there for 36 hours, eager to share their knowledge with the first-timer from Nashville; and, a fortyish guy from Hawaii, who was taking his “vacation from his vacation,” for the 12th time. He clearly loved it. As we sat in porch chairs just off stage at the Miller Light Pavilion, his teenaged kids rocked out a few feet away on the front row. While he had a specific reason for being there, I had simply stopped to linger in one of the empty, all-wooden but with a back-on-it, chairs.

I met folks from Connecticut, North Dakota, Minnesota, Florida, many more from Chicago, and on and on. Talks ranged from brief to extensive chats, but each always included the number of just how many Bonnaroos one had attended. These conversations usually ended with an enthusiastic high five.

Trying to describe how the people looked would be like picking out the most unusual outfit at an international clown convention. The main thing the festivalgoers had in common was festiveness, plus dressing down (very scantily in some cases) in anticipation of warm weather, except for a pretty good-sized number of enthusiastic revelers who chose to don full-regalia costumes. After that pretty much anything went………every color, every shape, and every imaginable form of tie-dye. Looking out toward the crowd, one could see every body shape, clad in a menagerie of infinite fashion choices, some of them quite questionable. No matter how outlandish or garish an outfit was, though, it was no problem, no big deal, everything was cool with the celebrants in full-on “Radiate Positivity” (one of Bonnaroo’s most popular catch phrases) mode.

More on the Vibe

One experience at twilight sort of exemplified the event’s overall atmosphere. While I was walking back to our “oasis” following the conclusion of the afternoon headliner’s performance, the flow of people going both ways almost gridlocked at this sort of casual intersection. Instead of pushing, shoving, or even panicking, the crowd began cheering (it reminded me of a home crowd leaving a football stadium after their team had won and spontaneously erupting into “Go Big Orange!” or insert your favorite team’s name here), with the cheers morphing into, “Bon-na-roo, Bon-na-roo!” I just smiled and shook my head while thinking…..these kids are really having a blast. And, then I realized, so was I.

And, yeah, there was some Music, too

When some of my friends heard I was going to Bonnaroo, they asked: “Who are you going to see (or hear)?” I would stare blankly and state, essentially, “I don’t know and I don’t really care.” Friday was the only day I could attend, so whatever the lineup was would dictate the musical part of “experiencing” the event. I did see and hear quite a bit of music, and with one big, notable exception, I pretty much enjoyed everything. lease note that I am not a “music person”; I enjoy all kinds of music but can rarely tell you who is performing. I like everything from “Mony, Mony” to the “1812 Overture”, anything from Kenny Loggins, most of Michael Jackson’s stuff, and a lot of the good country we have in Nashville.

The artists I heard either snippets or a few songs from included: The Wood Brothers, Dr. Dog, Ben Howard, Danny Brown, John & Jacob, The Orwells, and The Head and the Heart. Don’t ask me what they played, all of it good and the kids were grooving to most everything. On the What Stage (big ole main one) I really enjoyed Vampire Weekend and the thousands of kids there seemed to like it a lot. The one regret I had later is missing Janelle Monae on that stage, my buddies raved about her and my wife, after the fact, said she would have been a must see for her. Oh well, you just can’t cover everything, but lord how I tried. Now to the one I couldn’t avoid, because he was the headliner of the day (night?) and about all that was playing as we headed towards the end of the long day.

I had heard of Kanye West of course, he of the embarrass Taylor Swift on an awards telecast, he of the “private” wedding production with the humble Kardashian gal, but I couldn’t have told you any of his songs. Still couldn’t. Now, I know old white guys aren’t his target audience so he could care less about my take on his act. I call it an act, not a performance because that’s what it was to me. I still don’t know what he sounds like talking or singing (he did more of the former) because most of it was electronically altered by an echo-like sound. I could understand the n word, the f word, the mf words which adorned many of his songs and much of his ranting. He is mad at the Super Bowl for not hiring him, the media for most everything, Bonnaroo organizers for what they “did to him” for his extremely late, nearly pre-dawn show a couple of years ago. Basically I think he’s mad at anyone who is not him, and I thank God I am in that group. When I read the Tennessean’s review on his “return” I wondered if they were at the same show that I saw, but, hell, like I said, I don’t really know music.

I spent more words on the “downer” than all the other music, which is not fair to Bonnaroo because the offerings are spectacular. I doubt anyone could like every one of the hundreds of choices over the four days, but they certainly get enough choices to keep ‘em coming back for more.

One of the reasons I wanted to go to Bonnaroo was to see how this instant city of 85,000 functioned. I had known, slightly, co-founder Ashley Capps of Knoxville’s AC Entertainment from years ago, when he’d started (with developer Peter Calandruccio) Ella Guru’s, a cutting-edge entertainment, drink and food venue in the Old City. As we say in Tennessee, “Ashley, you done good.” The layout, the services, the concessions, the venues…all flowed and worked well. I think any city planner would be mightily impressed with the attention to detail, the variety, and the high quality of virtually every offering. Sure, the portable restrooms might have been less than pristine around midnight, but have you ever gone to a stadium restroom in the fourth quarter? The biggest break of the day was with the weather. It was extremely pleasant (cloudy) during the day and, even better, when the sun went down. I heard stories of the heat, the mud and the dust of years past, but, hey, no city controls the weather….and even the stories from people who had experienced the worst of the worst were told with great bravado, and, obviously, it hadn’t kept them coming back for more.

We had enjoyed 12 hours on site when we headed wearily out to our motor-coach pick-up location at 12:30 a.m. (we had an option to take the 3 a.m. shuttle, but, amazingly, none of the three of us were even tempted). The 20-somethings who accompanied us home were not quite so boisterous on the return trip, and seemed, much like us, ready to snooze. Am I glad I went? You bet. Would I go again? Not sure. I had such a positive experience on my virgin trip, that I’m not certain I’d want to disturb the memory of my most excellent adventure. However, now that I’m a “veteran,” I might even be enticed to show another rookie “the ropes” during Bonnaroo number 14 next year. In any event, I consider my trip to the 2014 Bonnaroo to have been one of the luckiest Friday the 13th days in a lifetime.